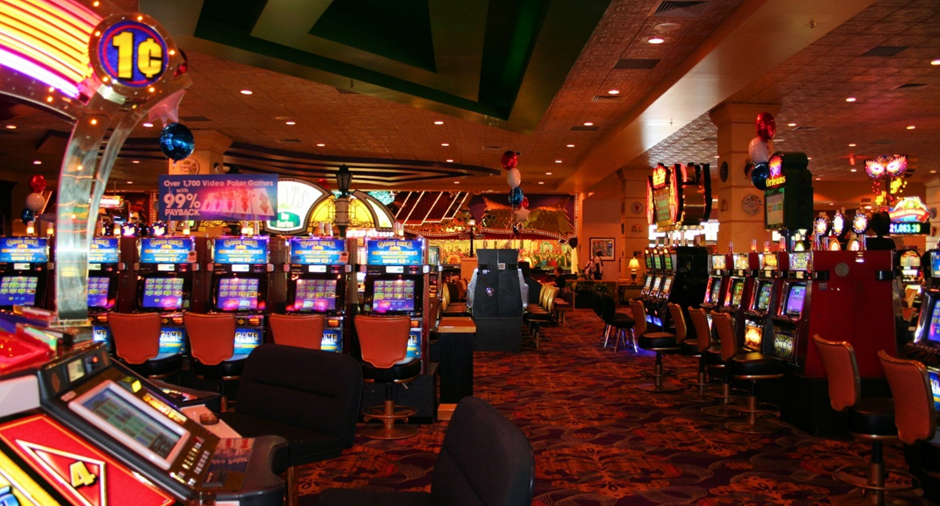 With the huge selection of slot machines online, you are always spoiled with choices. But not all are equally good. In the vast variety available out there we collected the 10 best slot machine games. With themes varying from the wild west to ancient Egypt, from Narcos to fruits there is something there for everyone. If you would like to try some slot games you can visit NetBet. Read more and play 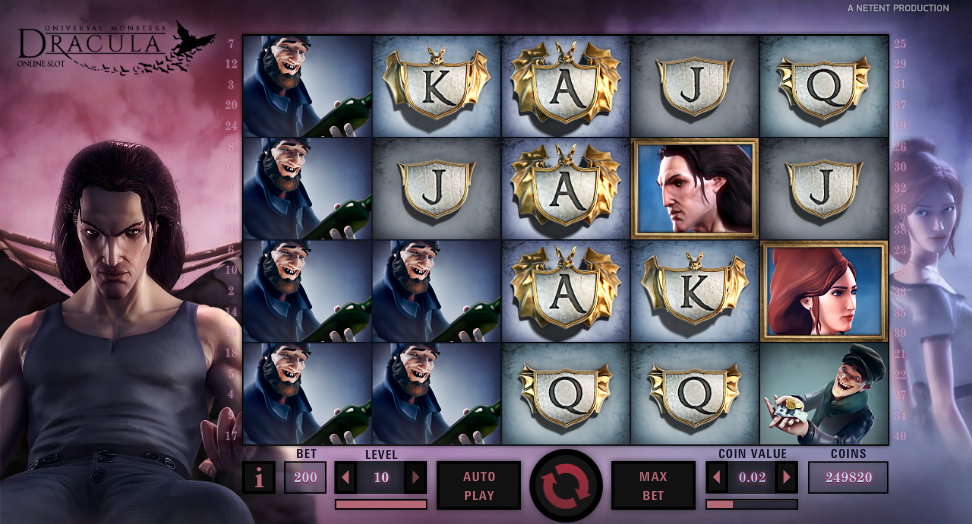 A breathtaking scene of a young lady chased by a vampire welcomes you to Dracula, a thrilling vampire themed video slot from NetEnt™, coming from their successful cooperation with Universal©. This 5-reel, 4-row, 40-payline, 10-level video slot has a brand-new Bat feature, Free Spins, stacked symbols, Stacked Wilds, and regular Wild symbols.

The Bat feature is randomly activated. When it is, the wicked Dracula on the left turns into a horde of bats which has the power to change a random number of symbols on the spinning reels into the same random symbol increasing your chances to make a winning combination.

The Free Spins feature is triggered when the stacked Dracula symbol and the stacked Lady symbol appear simultaneously on reel 2 and 4 respectively. 10 Free Spins are awarded. The fully visible stacked “Dracula and Lady together” symbol on reel 3 during free spins trigger 2 additional free spins.

This game is also available on Mobile, for full enjoyment wherever, whenever you like! 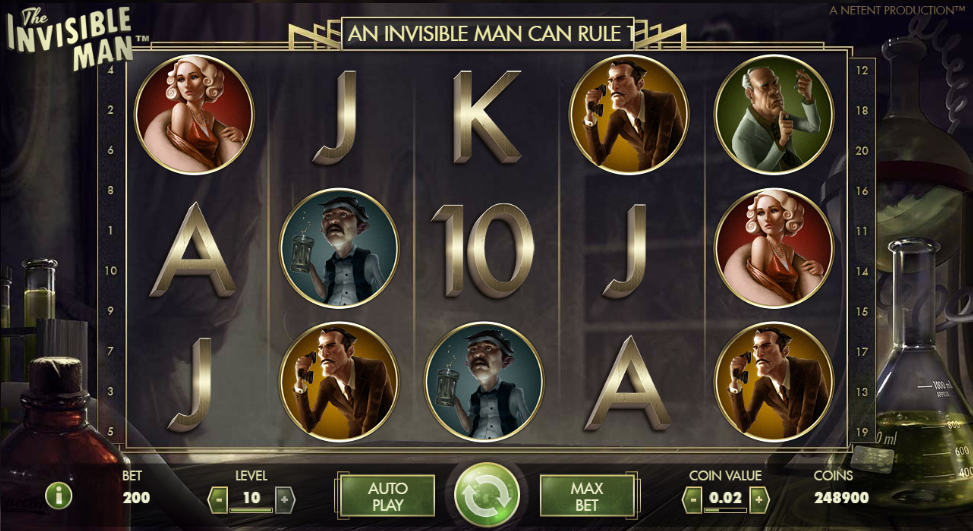 In his experiments for food preservation, Dr. Griffin has just made an incredible discovery. There is a formula, entailing taking a combination of monocane and other chemicals, which can make a human being invisible. The excitement is so big to cloud his judgement. He leaves his boss, Dr. Cranley, Cranley’s beautiful daughter, Flora, and his friend Dr. Arthur Kemp and complete the experiments in solitude and unnoticed. He eventually tests the formula on himself and becomes The Invisible Man. There is a major drawback though, he doesn’t know how to reverse the process.

NetEnt™ together with Universal Studios presents a stunning branded game, filled with amazing features and delivering all the excitement and thrill of a hunt to the character played by Claude Rains in the 1933 homonymous movie. The Invisible Man™ is a 5-reel, 3-row, 20-line (fixed) win-both-ways, 10-level video slot with Re-Spins, Free Spins, Wild substitutions, Walking Wilds and 2 Bonus Features.

During free spins, 2 meters with 8 spaces each appear above the reels. The meters correspond to the wilds that appear during free spins. When a Policeman or a Griffin move off the reels, 1 space is filled on the corresponding meter. If during the Free Spins mode one of the meters is filled, a bonus game will start at the end of the Free Spin rounds. The 2 bonus games are the Police Spin feature and the Griffin’s Rage Bonus Game. The Police Spin feature consists of 3 spins with 5 random wilds appearing on the reels. The Griffin’s Rage Bonus Game is a hunt to the Invisible Man taking place in 3 different locations. Player has to click on 1 of 5 items to pick the corresponding prize. When the player picks a coin, it is added to his running coins total for the Bonus Game and player can choose another item in the same location. The multiplier increases by 1 at any pick, and can reach a maximum of X4. The total win in the Bonus Game will be given by the total coins amount multiplied by the reached multiplier.

This game is also available on Mobile! 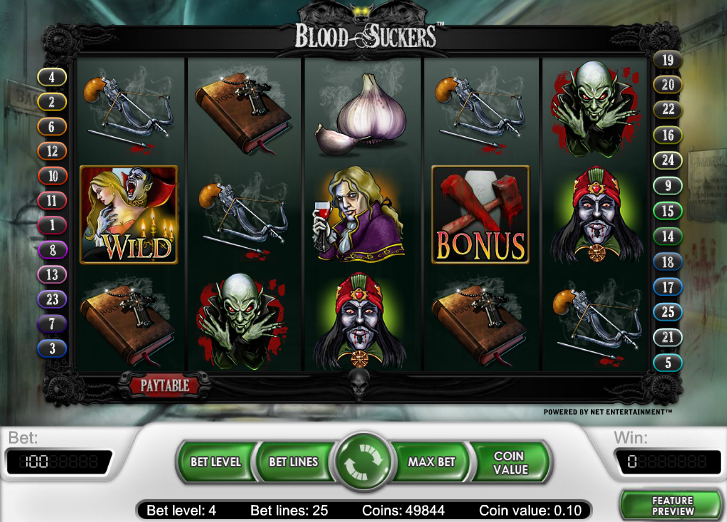 There are vampires everywhere. It’s hard to escape. The only solution is to fight. Holy water, some garlic, a lethal crossbow and a very precious crucifix will help you survive. Kill as many vampires as possible in the slaying vampire bonus game of Blood Suckers™ and win big. Blood Suckers™ is a 5-reel, 25-payline, vampire themed video slot from NetEnt with beautiful graphics, some bloody animations and, above all, a high payout ratio with very frequently triggered winning combinations.

The Feeding Vampire is the wild symbol that can substitute for all other symbols with the exception of the Scatter and the Bonus symbols.
3 or more Scatter symbols trigger 10 free spins and a multiplier of your current bet.

Three or more Bonus symbols in succession from the leftmost reel on an active payline, take you to the Bonus Game. Open coffins to find and slay sleeping vampires, until you find one awake who transforms himself into a horde of bats and escapes, that will end the bonus game.

See the dead returning to life in Zombies 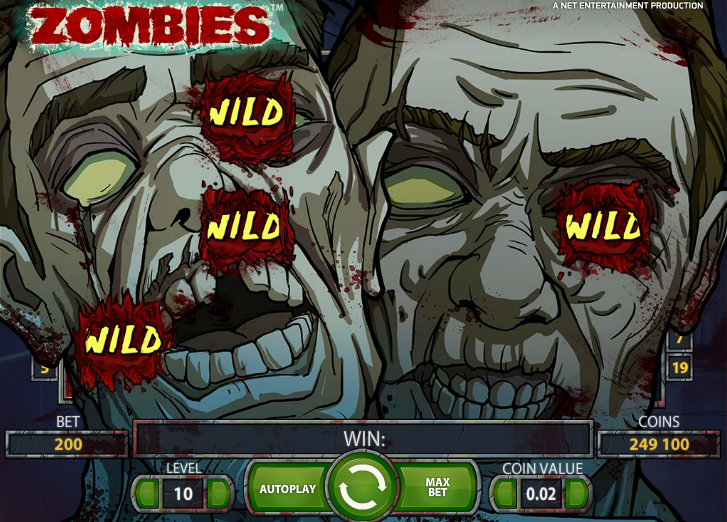 One of the most successful releases of 2012, Zombies™ is a 5-reel, 20-payline, zombies themed video slot developed by NetEnt. The dead return to life to bring you big prizes thanks to Random Wild, Wild substitutions, Stacked Wild and a Free Spins mode with multiplier of up to 10 times.

A dreadful virus is turning dead into brain eating zombies and you have to fight for your life with any kind of weapons you can find, including axes and chainsaws. With great animations, compelling sounds and a quite unique splatter theme, Zombies will definitely put your nerves at test.

The best feature of the game is the Random Wild feature in which two zombies heads appear over the reels and are then automatically shot up to 6 times. Any shot unveils a new wild which gives the players additional chances to make winning combinations.

Take what you can and give nothing back in Ghost Pirates 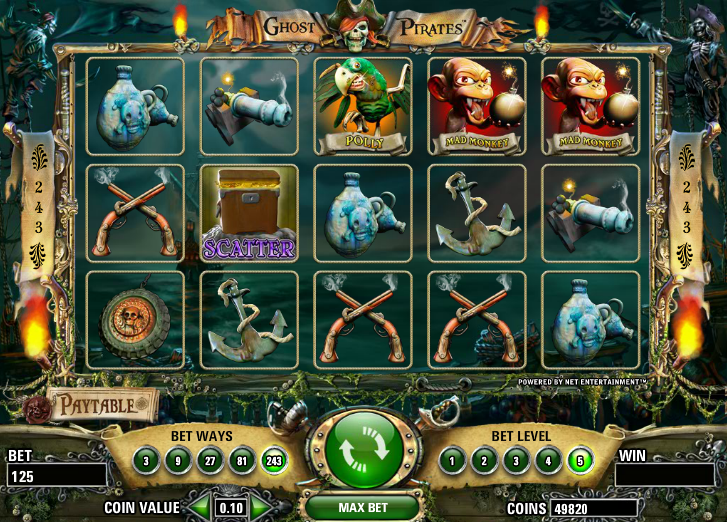 If you can’t trust a pirate, you damn well can’t trust ghost pirates, so you have to find the treasure before they do. Fight your way to the treasure chest in Ghost Pirates, a video slot offered by NetEnt, with 5 reels and 243 ways to win instead of the traditional play-lines. With a new game buttons console, stunning graphics and beautiful animation the game features a wide array of pirate-themed symbols, like treasure maps, mysterious medallions, bottles of rum, guns and cannons, together with a bizarre ghost crew of course.

The treasure chest is a scatter. Get 3, 4 or 5 in succession from leftmost reel with maximum bet and win a multiplier of 5, 20 and 50, that will be applied to your current bet, and 15, 25, 50 free spins respectively. Free spins wins are tripled!

The ghost pirate is the wild and can substitute for any other symbol.