Copyright © Spooky Slots.
Powered by Monster Affiliates.
Previous post
Help the good zombie family defeat the bad zombies in The Zombies
Next post
Let yourself be tempted by the beautiful deviless of Sinful Spins slot

Vampires vs. Werewolves, which side would you choose? 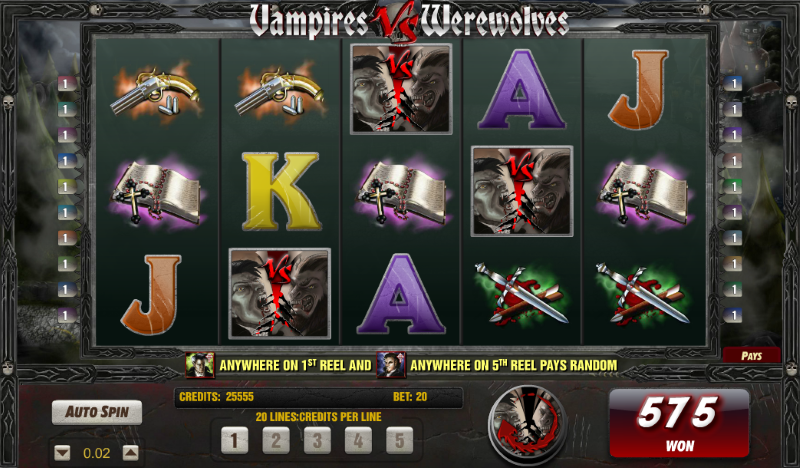 In the never-ending battle among malefic forces and evil powers, a classic one is the fight between vampires and werewolves. You will have to side with one of the parties in the bonus game feature of Vampires vs. Werewolves slot machine, a horror themed, 5-reel, 20-payline video slot developed by Amaya Gaming in which vampires and werewolves revive their epic struggle. Only silver bullets and crucifixes will allow you to get out unharmed.

Get the vampire scatter symbol anywhere on 1st reel and the werewolf scatter anywhere on 5th reel to win a random amount on all the clash symbols.

The Vampire vs. Werewolf bonus symbol anywhere on reels 2, 3 and 4 triggers the bonus game feature. Choose whether being a vampire or a werewolf and collect prizes on your path, where you move by throwing a die.

The wild symbol which substitutes for any other symbols with the exception of the two scatters and the bonus symbol is a young lady, who might be Wilhelmina “Mina” Harker, character of Bram Stoker’s 1897 Gothic horror novel Dracula or, more likely, Isabella Marie “Bella” Swan, character and the protagonist of the Twilight series, written by Stephenie Meyer.